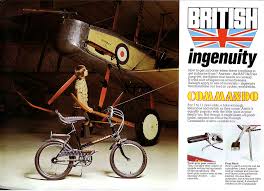 It can’t just be me, I had expected that by a certain age (this one) there would be phrases which would no longer escape my lips.

“I fell off my bike,” Yes those actually were my first uttered words today.

I am 43 for goodness sake, I don’t do crazy stunts on my bike like my manager who nearly broke his back coming off of his bmx at the park (he is older than me). Or my other colleagues who hurtle down mountain tracks at 45 miles an hour on their large tired, suspension filled springy bikes. Those guys jump crevices and think nothing of dropping off a 20 foot cliff.

I don’t do the 90 mile Saturday circuit for fun with the spandex boys and their shaved legs, I travel 2 miles, ten minutes each direction on two days of the week.


And yet there I was hobbling into work this morning like an injured toddler.

My cycling career has not been, let’s say, triumphant. My first bike had solid rubber tires and was the most unwieldy uncomfortable thing available. I was knocked spectacularly from my bike at age nine, smashing his windscreen with my cranium and tearing my ligaments with his bumper.

Many times my shins have lost their skin at the rough edges of pedals, I up ended over the handle bars and met the concrete with my forehead, earning the obligatory childhood split eyebrow.

Too many times too recall I have found myself sliding along gravel surfaces beside my bike or looking back in wonderment at what caused my bike to be ten feet behind.

I caused great laughter as I ploughed into the rear of a car, I had been cycling one handed along the road not looking as usual when I landed on the tailgate of a car. My friend had seen it about to happen but was laughing already in anticipation so let it play out. (Thankfully there was no damage to either party or to him).

So it was as I groggily stepped out into the dimness of the rubbish security light this morning that the bike was hauled from the shed. My right foot wasn’t fully on the pedal as all of my weight transferred to it for the John Wayne left leg swing, both knees clattered on to the Victorian stone driveway and brought back a hundred childhood pains.

The pain has largely gone now, eleven hours of genetic repair work has done what it was designed to do and we go on, ready for the journey homeward in an hour.

As humans we never quite seem to grow up, yes our bodies get larger and our brains mature (some more than others). We learn loads of new things and experience wonderful and terrible situations, we laugh and cry and progress through the years more or less intact. But do we ever really fundamentally change?

I still laugh inappropriately when I should be parenting, I still flick water at work colleagues and nudge them off balance in the men’s room, but having a handful of water run down my face at the dryer in response makes life a bit brighter.

I am not the same person that I always was in so many ways, life changes us and so it should, but as long as there are bikes and I am near them there will probably always be injuries.

Previous Entries What is your name? Next Entries Not for the fainthearted

10 thoughts on “Live and don’t learn”