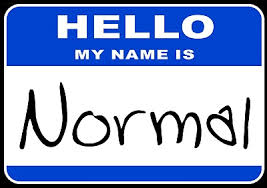 Normality is such a subjective concept that it is next to impossible to legislate one single bench mark to measure against.

For the last two weeks my own personal idea of what normal is has been thrown up in the air.

A conversation with my doctor exposed the danger of the human species, we can grow to accept almost anything as normal thinking and behaviour if it develops slowly enough.

Ever since returning to work after the Christmas holidays there has been a gradual but steady slide into a reduced level of existing. If you knew where the starting point had been you would realise that it was not a high water mark to begin with.

My level of functioning has been greatly reduced in the last year and a half so to further slide down the scale was not a welcome development.

I have spent about 80% of the time since January with the constant thought that life was pointless and not worth living any more. Considering that the balance sheet was heavily weighted on the positive side as far as blessings were concerned mine was not a healthy mind.

As a race we are prone to all manner of unhealthy excesses, history has recorded for us almost every imaginable horror and atrocity committed in full assurance that the actions were not only justified but normal behaviour. The problem was that at the time it was normal behaviour.

The recent rise of the Islamic State showed only too clearly how close to the surface such barbarism resides. Men who were raised in the suburbs of our towns and cities slipped off to Syria and Iraq and before long were killing and torturing alongside hardened warriors. This behaviour is not limited to any one nationality as only the simplest of historical searches will reveal.

After eighteen years of being together my wife has pretty much got my number with most things. Some people find that level of knowing a little uncomfortable, for me it is a life saver. It so often takes a difficult conversation where the pain of exposure is keenly felt to move us forward from a place of stagnation.

It was just such a conversation that led to a visit with the nurse at work and then the doctors visit that followed. I find it a great sense of wonderment that it is possible to move so far mentally in such a relatively short space of time.

Being confronted with the harsh realities of our fragility can be extremely sobering. While being incredibly kind and gentle with regard to my mind, the doctor was totally blunt as to the present need for action. Having discussed all other options we concluded that intervention was the way forward.

Almost two weeks on from that conversation mine is a different world. Calmness is restored, perspective is functioning and the inward tourettes has gone.

My past experiences with anti depressants was not too good and so there was a certain reticence to venture down that road again. I have since learned that 98% of them have lactose in them, hence my horrible reaction to them.

That issue having been resolved it seems, for the time being anyway, that my new normal comes in a daily capsule. This is OK,  it is not my old high capacity normal but it may be a step that leads back to something resembling the man I miss.