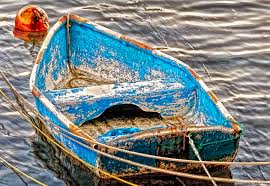 Two weeks ago I went into work to be met with the news that a colleague of mine had decided to sink his boat.

It is not my place to analyse this particular situation, I did not know him well enough to pass comment in any way. All that matters now is that for whatever reason that became large above all others this gentleman decided to scuttle his boat.

I am in no position to judge in any way (neither are you by the way) me because I  have lived with that thought as the predominant one and you because you know even less than I do what was going on in his mind.


His is the extreme end of negative thoughts but many of us do the same thing in a multitude of other ways every day of our lives.

I have been playing solitaire a bit on my phone. I do it mostly at night time as I lie in bed to make my eyes sleepy and weary before saying goodnight to the day. Ten minutes is usually enough. It would be fair to say that I am not a dedicated player of this game, if it is not going well by 1 minute 30 the game is aborted.

I can usually tell by that point if there is any possibility of beating my highest score. This is the goal of me playing, my best score is 1 minute 20 so if the game isn’t complete by my cut off point it prompts a new deal.

For many this is the approach that is taken to much of life.

We have predetermined cut off point that we absolutely refuse to persevere beyond. The result of such thinking is that marriages are disposable if they don’t tick box a, b, and c. Jobs are thrown away because we bought into the lie that Confucious was correct when he decided, “find a job you love and you will never work another day in your life.”

I agree with the sentiments of his idea but the reality is that few of us will ever be able to fulfil this. We forget that he lived long before industrialisation and commercialism. It may have been simpler to achieve such things in his day before our expectations reached the dizzying heights of 21st century living.

A couple who had been married for 60 years were asked why they thought that their marriage had lasted so long. The answer was supremely simple and yet ultimately rejected by our culture, “we were born in a time where you fixed something if it was broken!”

I have known many people who seemed to press the self destruct button if things were going too well, or if it started to get difficult. I am not naive enough to think that it will always work out, people are not that straightforward.

My thought for today was sparked by Sia the Australian singer who updated the old song for the new Annie film.

Over the years I have known too many people who sunk their boat when hope evaporated. I  too have been tempted on too many occasions to do the same, fixing our vision to something tangible is the single most powerful method of overcoming this temptation.

We all need something to live for.

My family have kept all of the craziest thoughts at bay without even realizing it. Just by being themselves they were enough.

So my plea to you is just this, keep breathing, even if all that you do is float, at least you are above water.

21 thoughts on “Don’t sink the boat when you lose hope.”