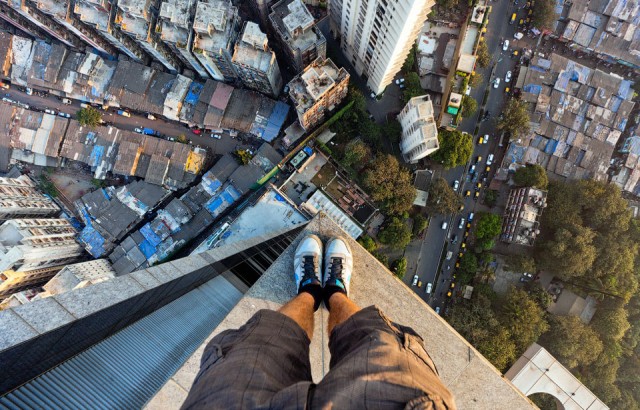 Perhaps it was a self fulfilling prophecy as my friend suggested.

It was increasingly apparent from the growing patch in the corner of our bathroom that there was a problem somewhere above. I had scrutinised it from below and concluded that something was seriously amiss with one of the sandstone blocks running up to the chimney.

I am not good with heights, this is not a new phenomenon but it has been a constant battle that I keep trying to win. On many occasions I have hung from ladders while decorating or working on the outside of our building. It usually goes smoothly until something in my inner ear wobbles, sending a signal to my whole body that I will be falling soon. The grappling on to the ladder that ensues usually stops the follow through but causes enough adrenaline to require a descent.


So after postponing it for long enough and one more hour on the sun lounger I capitulated and got the ladder out.

The day was perfect, clear blue skies and head, warm sunshine and no wind.

Like Jack climbing his beanstalk I ascended to the first flat roof, all good. Pulling the ladder up carefully and around to the next phase was uncomplicated, my fake Converse gave me a good grip as I clambered up on to the slates of the sloping roof which was to be my anchor point.

I had done this before several years ago, I had performed each of these steps as I repaired the North facing wall.

For some unknown reason this time I could not get the ladder to the correct angle that it wouldn’t start sliding. Secure in the knowledge that I had done this before I was not prepared to give up. Thus after a few false starts I was at the top of the ladder surveying the vast expanse of the roof.

I was topless, with only shorts and flimsy footwear, perched precariously atop an aluminium ladder 40 feet up, the living embodiment of a negative risk assessment.

Our house has sat securely upon a sandstone foundation for 125 years, it rises up from the ground in uneven blocks of sandstone to the grand Victorian chimneys. The weather has eroded some of the stones over the years but to my great delight those on the roof were perfectly intact. It was just the mortar that was gone on the North side which was allowing water to get in.

These are always great times of relief for me, the problem isn’t as big as first appears, it isn’t going to cost thousands to fix and best of all I can fix it. I used to be much better at facing things head on, I would just dive in and rip stuff apart with confidence and self belief. This has taken a bit of a battering of late but it might just still be there, albeit hiding.

The joy I felt as I descended was abruptly taken on the last rung of the ladder (I wish that I could have watched what happened next because I believe it would have been very funny) as I stepped backwards off of the rung on to the roof the ladder swung away from under me.

Now, in that instant all I could think of was saving the greenhouse below, so as I grabbed tightly on to the falling ladder with my right hand my left arm had a close encounter with the wall. The fall was only about four feet and over in a flash but a few layers of flesh from my arm remained on the wall.

Back on terra firma the wound  was assessed and my faithful nurse removed blood and grit with alcoholic wipes.

Sitting peacefully in the sun thirty minutes after leaving my lounger, I reflected on my new wound.

The minor sting of a full arm graze still could not remove the relief and happiness of discovering the dreaded repair was now achievable.